LIBOR scandal was discussed in the earlier articles like Pushing the reset button on LIBOR – Speech by Martin Wheatley and Impact of Libor Review on Trade Finance in India .

END_OF_DOCUMENT_TOKEN_TO_BE_REPLACED

Note: Post this article there are changes in maturities for which libor is issued. This article might now be relevant for long tenure transactions (12 Months and Above). Refer link for more details on change in Libor: Change in LIBOR Tenures and Impact on Trade Finance

Banks and Importers consider various factors before going for Buyers Credit transaction for more than 6 months tenure. One such factor is buyers credit with 6 Month Libor Reset option.  The below article elaborates on these factors.

END_OF_DOCUMENT_TOKEN_TO_BE_REPLACED

Note: Since this article was written, below regulation has been implemented. Refer Article: Change in LIBOR Tenures and Impact on Trade Finance

END_OF_DOCUMENT_TOKEN_TO_BE_REPLACED

Note: Since this article was written, below regulation has been implemented. Also Refer Article: Change in LIBOR Tenures and Impact on Trade Finance

Mr. Martin Wheatley – Managing Director, FSA, and CEO Designate, FCA – gave a speech at the Wheatley Review of LIBOR. It contain details on various issues in relation to LIBOR and his final recommendation of rectifying the same. It is worth reading, thus sharing with you complete speech below.

END_OF_DOCUMENT_TOKEN_TO_BE_REPLACED

EURO based buyers credit is currently funded by most of the banks using EURIBOR which is issued by European Banking Federation and ACI. A similar rate is issued by British Banking Association known as EUR Libor but is not often used by bankers for funding buyers credit transactions.

END_OF_DOCUMENT_TOKEN_TO_BE_REPLACED

Post below article there has been change in Libor Guidelines. Refer article “Impact of Libor Review on Trade Finance in India” & “Pushing the reset button on LIBOR – Speech by Martin Wheatley“

LIBOR stands for London InterBank Offered Rate. LIBOR is an indicative average interest rate at which a selection of banks (the panel banks) are prepared to lend one another unsecured funds on the London money market. Although reference is often made to the LIBOR interest rate, there are actually 37 different LIBOR interest rates. LIBOR is calculated for 7 different maturities and for 5 different currencies. The official LIBOR interest rates (bbalibor) are announced once a day at around 11:45 a.m. London time by Thomson Reuters on behalf of the British Bankers’ Association (BBA).

END_OF_DOCUMENT_TOKEN_TO_BE_REPLACED

At the time of taking Buyers Credit, one would consider availability of tenure by banks, price variation based on tenure, etc. to arrive at tenure for which buyers credit is to be availed.  On the due date, either the buyers credit is paid off or it can be  further rollover for additional tenure.

END_OF_DOCUMENT_TOKEN_TO_BE_REPLACED

Since last week or so, Foreign bank branches based out of Mauritius are either not able to quote or are quoting above the RBI prescribed ceiling for 6 months LIBOR + 200 bps.

Reason being, low liquidity has resulted into high cost of funds.

Above will affect those importers who used to arrange funds from Mauritius based Foreign Bank which were somewhat cheaper than Indian Bank overseas branches but did not want to get into withholding tax. As per Double Taxation Treaty with Mauritius, withholding tax on interest payment to Financial Institution is nil.

Now options with them are either to take funds from Indian bank overseas branches at higher cost or from Foreign bank and pay withholding tax on due date.

Note: Since the time this article was written, 6 Month Euribor has come down from 1.79% (July 2011) to 0.070%. Concept of cross currency still holds but the example would change. Please take below example as reference only.

Question of Buyers Credit in Cross Currency comes up in below cases.

At the time of receipt of the document, importer will book a cross currency Spot+2 or forward as per his comfort with his bank, to get the exact conversion from one currency to other currency. Rest of the process is same as buyers credit which importers already carry out.

Cross currency can at times, lead to cost saving. An Example of import payment due in Euro to buyer’s credit into Dollar  is given below.

Transaction Value: EURO $100000
USD Value of Buyers Credit: $141713 (as per current market)
Tenure: 6 Months
Quote under both USD and EURO is L + 1.50%
LOU Charges are same for both transactions
Forward for both currency is booked (Rate taken from NSE India Website)

Calculations (LOU charges not are taken below, as per assumption that it is same in both transaction)

Other factor to be considered before taking decision

END_OF_DOCUMENT_TOKEN_TO_BE_REPLACED 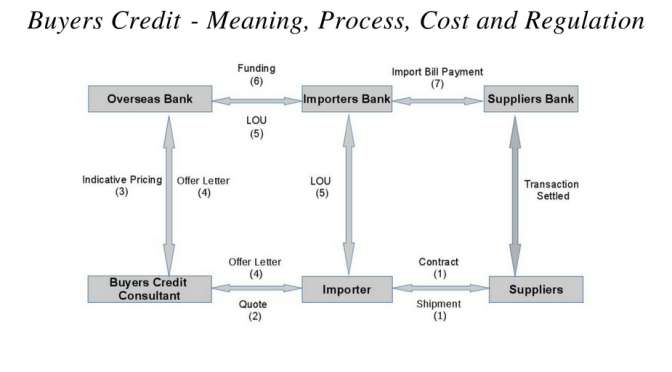 Buyer’s Credit refers to loans for payment of imports into India arranged by the importer from a bank or financial institutions outside India. Based on letter of undertaking of Importer’s bank, Overseas bank credits the Nostro of the importer’s bank which in turn uses the funds to make payment to the Suppliers bank against the import bill.