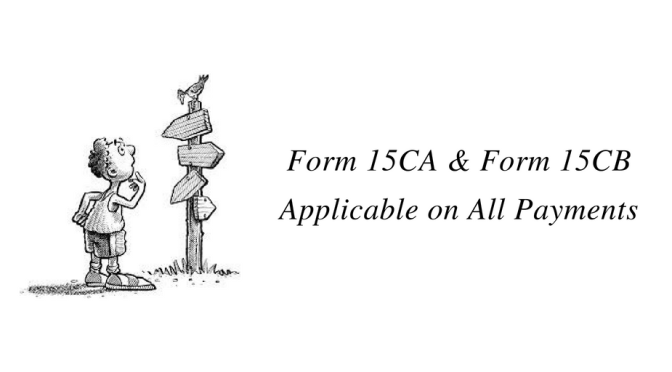 In revised notification issued by CDBT on 16th December 2015, effective 01’st April 2016, import payment has been made part of exempted list. Hence forth Form 15CA and Form 15CB will not required for the same during import transactions.

In earlier article “Revised Form (15CA, 15CB) and Rules for Payment to Non Resident“, we had discussed that Form 15CA and Form 15CB is applicable only on those payment which were chargeable to tax.

In section 195 of the Income-tax Act, for sub-section (6), the following sub-section shall be substituted with effect from the 1st day of June, 2015, namely:— “(6) The person responsible for paying to a non-resident, (not being a company), or to a foreign company, any sum, whether or not chargeable under the provisions of this Act, shall furnish the information relating to payment of such sum, in such form and manner, as may be prescribed.”.

After section 271H of the Income-tax Act, the following section shall be inserted with effect from the 1st day of June, 2015, namely:— “271-I. If a person, who is required to furnish information under sub-section (6) of section 195, fails to furnish such information, or furnishes inaccurate information, the Assessing Officer may direct that such person shall pay, by way of penalty, a sum of one lakh rupees.”.

Which means from June 1, 2015 on all payments made to non resident or foreign company Form 15CA and Form 15CB is applicable; except for payments under specified list (given below).
From Buyers Credit respective, as per our interpretation, Form 15CA and Form 15CB will still not be applicable to payments made to Indian Bank Overseas Branches as parent of the same is resident and above clarification hold true only for non-resident, (not being a company), or to a foreign company. Further details on the same can be found in article ” Form 15CA & Form 15CB not Applicable on Interest Payment to Indian Bank Overseas Branches