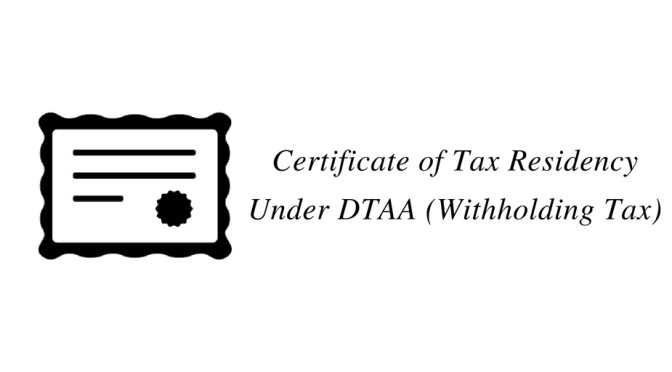 Note: As per Amendment to Finance Bill 2013, below requirement of prescribe format has been done away with.

Sec 90 of Income Tax Act 1961 has been amended by inserting Sec 90 (4). Details of the section has been given below. Sec 90 (4) have many implications, but this article is concentrating on its implication on Buyers Credit transaction.

From April 2013 onwards when buyers credit is taken from foreign bank, importer will also need to collect Certificate of Tax Residency in below specified format from these foreign banks to claim benefit of lesser Withholding Tax (WHT) rates under DDTA or else standard rate of 20% will be applicable.

Sec 90 (2) Where the Central Government has entered into an agreement with the Government of any country outside India or specified territory outside India, as the case may be, under Sec 90 (1) for granting relief of tax, or as the case may be, avoidance of double taxation, then, in relation to the assessee to whom such agreement applies, the provisions of this Act shall apply to the extent they are more beneficial to that assessee.

S. 90 (4) of the Act, as inserted by the Finance Act 2012 w.e.f 1.4.2013 provides that an assessee, not being a resident, to whom an agreement referred to in sub-section (1) of s. 90 applies, shall not be entitled to claim any relief under a Double Taxation Avoidance Agreement unless a certificate, containing such particulars as may be prescribed, of his being a resident in any country outside India or specified territory outside India, as the case may be, is obtained by him from the Government of that country or specified territory. A similar provision has been inserted in sub-section (4) of s. 90A of the Act. Pursuant therto, the CBDT has issued Notification dated 17.09.2012 to insert Rule 21BA and Forms 10FA and 10FB specifying the manner in which the aforesaid Certificate of Tax Residency should be obtained.

Certificate of Tax Residency should contain below minimum details

Also, the certificate referred shall have to be duly verified by the Government of the country or the specified territory of which the assessee claims to be a resident for the purposes of tax.